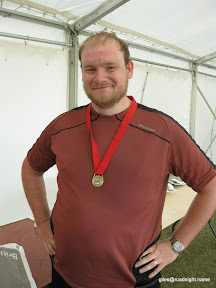 Well, I did it! Last Sunday I completed 83 miles cycling from London Blackheath Hill to Eastbourne. The ride took me about 8 and a half hours total.

The first 30 – 35 miles were fine. From around 35 miles up to I think about 57 miles it was ALL hills. Literally. I was either struggling up a hill at around 5 or 6 MPH or flying down a hill at around 30 MPH dodging oncoming traffic. Obviously it took a lot longer going up the hills than it did to come back down again.

After about 57 miles the ride was pretty good again apart from one steepish hill and Beachy Head which was a very long but not very steep climb. It was very tough though as it was right at the end and pretty much every part of my body was hurting by then.

The last mile or so was fantastic as it was downhill all the way right to the finish line. It was a real relief to finish. 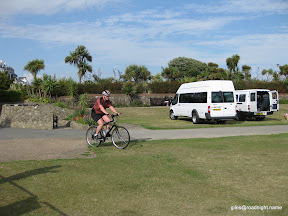 I was very sore. My legs were sore, my knees were very painful whenever I moved them, my back, arms and neck were sore and could no longer find a pain-free way of sitting on my saddle.

At the finish line the Red Cross provided a masseuse who did help my back. We also got a goody bag with a medal in and a water bottle.

Honestly most of this ride was hell and wasn’t enjoyable. There weren’t that many people either and although I chatted to a few people for a lot of the ride it was just me with no other cyclists visible.

I am not sure I’ll do it again next year. Having said that I should be fitter and have lost more weight by then so it should be easier. I think I will do the London to Brighton Ride net year as it is fairly easy and I think very popular.

I did very well with my sponsorship and was the second or third highest fund raiser and raised a total of £530.

Many thanks to all the people who sponsored me.

This week I have not been cycling as I am still saddle sore. I am really looking forward to getting back on the bike next week though.

There are a few photos of the day here.